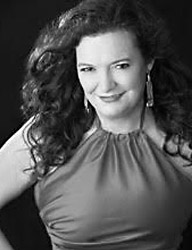 Mezzo Soprano Kyle Engler has been praised for her extreme versatility in both operatic and chamber music. The Baltimore Sun has called her “… a virtuoso of a high order” and “dramatic and visceral.” As a performer on the operatic stage, she has sung the roles of the Secretary in Menotti’s The Consul with the Washington Opera, Charlotte in Werther, Dorabella in Cosi fan tutte, Lucretia in The Rape of Lucretia, Mercedes in Carmen, Indiana Elliott in The Mother of Us All, and Cherubino in Le Nozze di Figaro among others. Engler has also participated in the world premiers of several new operas. In January, 2005 she performed to great reviews when cast by Placido Domingo to premier the role of Lydia Dudley in Washington National Opera’s production of Democracy, An American Comedy by Scott Wheeler. She was also invited to perform in Augusta Read-Thomas’ opera Ligeia, commissioned and conducted by Mstislav Rostropovich, at the Recontres musicales d’Evian in Evian, France.

Engler has been an Apprentice Artist with the Lake George Opera Festival and the Sarasota Opera Festival, and has toured and performed throughout Europe with the Ravel Trio and The Pennsylvania Academy of Music. She has been featured with several orchestras throughout North America performing works such as Barber’s Knoxville: Summer of 1915, Elgar’s Sea Pictures, Berlioz’s Les Nuit d’Été, Beethoven’s Symphony No. 9, and Mahler’s Lieder eines fahrenden Gesellen. She has also performed with longtime collaborator Daniel Lau in solo recitals at the Cleveland Museum of Art. Recent performances and releases include solo recitals and concerts throughout the United States and Europe.

An advocate of contemporary works and an active chamber musician, audiences have enjoyed her performances of Berio’s Circles and Folksongs, the United States premier of Ann Boyd’s My Name is Tian, Crumb’s Night of the Four Moons, Federico’s Little Songs for Children, and John Harbison’s Mirabai Songs. Engler is a member of the Morpheus Trio along with pianist Daniel Lau and hornist Larry Williams and Director of Vocal Studies at McDaniel College.